Avoid These Things in a DSG Transmission

What all you shouldn’t do in a DSG gearbox car? Read this blog to know things to avoid in a DSG transmission car.

Many new innovations and technological improvements have been made to modern cars over the past few decades. Dual-clutch transmissions are one example of advanced mechanics. Many cars in India feature dual-clutch gearboxes referred to by different names by different manufacturers. This type of transmission is fairly modern and very advanced, with computer-controlled transmissions that are fully controlled by sensors collected from different places. In fact, even budget cars like the VW Polo and Ford Figo have automatic transmissions with dual clutches.

However, Volkswagen will not offer DSG-equipped models with their existing 1.0-litre TSI motor. It does not have a DSG, but it does a really good job nonetheless. The gem motor comes with a torque converter instead.

Regarding Hyundai’s rivals, it also offers its own version of the DCT automatic transmission.  The fast-shifting gearbox is paired with two GDI engines sold by the company in India. In addition to the 1.0-litre 3 cylinder, the 1.4-litre 4-cylinder turbo petrol engine on this range is also available.

Even though DSG automatic transmissions are easy to use and offer exceptionally quick and precise shifting, they are maintenance intensive. A change in driving style is also necessary so that we don’t damage the transmission.

How does the DSG gearbox work?

To put it simply, DCTs and DSGs have two shafts, one for odd gears, the other for even gears. 2 Separate clutches for both the shafts, hence dual-clutch. After engaging the first gear, the second gear has been selected on the other shaft and is available for engagement. As the vehicle gains speed, the second gear is needed, the clutch is engaged. The same happens when the transmission downshifts.

Now that you have a brief understanding of the DSG transmission, let us know the things that you should never do while using a DSG or Double Clutch automatic transmission. We bring to you six important points on how to take care of your dual-clutch transmission:

We all have this common habit of putting the car in neutral at traffic signals. As soon as the computer senses that you’re slowing down and putting pressure on the brake pedal, it automatically disengages both clutches. It does not burn any extra fuel when you are standstill in “D” or driving mode or “N” or neutral mode at a traffic signal. Modern cars have start/stop functions that shut down the engine when you reach a stop and start it when you release the brake pedal. This only happens when you’re in “D” mode. This saves extra fuel and also saves your muscle movement while waiting on a traffic signal. Thus, keeping the car in Drive with the brake pressed is perfectly normal, just don’t give throttle when doing so By doing this, the clutch will be engaged again, and the flywheel will rub against the clutch, causing heat to be generated.

There are two clutches in a dual-clutch transmission, as opposed to one in torque converters. The transmission continuously slips the clutch to ensure that the car is at a standstill at an incline if you don’t use the brake to stop the car at an incline.  This overheats the components inside and can damage the transmission The brake disengages both clutches completely, and the transmission doesn’t have to exert any additional effort for the vehicle to remain stationary. So, using the brake pedal to stop the car from rolling back on slopes is the way to go if you want to extract more life from both clutches. 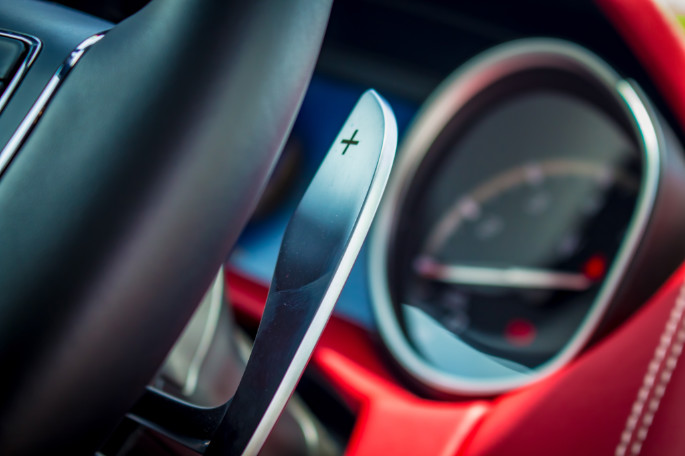 This type of transmission now allows the driver to engage manual mode so that the gears can be shifted by the mode selector itself, or by the flappy pedals behind the steering wheel if there are any. This clutch will still be controlled by the computer on the basis of the speed of the vehicle, as well as your foot position on the accelerator or brake pedal. It has a minimum of two transmission shafts that control odd and even gears respectively. When you accelerate, the transmission anticipates that you will do an upshift and prepares for it. Upshifting when braking will give a mixed signal to the ECU and it might hamper the circuits. When you downshift, you are likely to feel the transmission jerk and take longer than usual. When you’re braking and the transmission predicts you’re going to downshift, but you instead upshift, the whole dual-clutch system is thrown into a tizzy. This is very harmful to your dual-clutch transmission and should be avoided at all costs.

Dual-clutch performance cars have an accelerator launch control that keeps the rpm at a certain level for accelerated acceleration. It is not common to find this feature in budget cars with dual-clutch transmissions because they are not meant for drag races anyway. Nevertheless, if it is something you intend to do, you should do it properly. With a dual-clutch car, you should press the brake pedal with your left foot, then the throttle pedal with your right foot, and quick release the brake pedal. The engine will try to spin the clutch whereas the brakes will try to do what they do the best. The critical thing here is to take care that you don’t hold the brake for too long. Trying to move the vehicle forward while on the brake completely damages the clutch. It can cause major damage to your transmission.

Moving the vehicle by only releasing the brake can do some serious harm to transmission. This is somewhat similar to keeping the car on hold on a slope by balancing the acceleration and car rolling back. In this way, the 1st gear clutch is not fully engaged and causes more wear on the clutch. Driving this way reduces the life of the clutch by big time. If you are trapped in heavy traffic and have no choice but to drive like this, you should wait until there is some space between you and the car in front, this way you will be able to lift the foot off the brake pedal completely and will not damage the gearbox.

When coasting downhill, shifting into neutral will save fuel, as the car restricts fuel flow. This is exactly what we do not want. It is more sensible to switch the gear lever to drive since you will have more control over the vehicle. Well, you won’t be able to use the engine brake to slow down, which is necessary for hilly areas. In these circumstances, some harmful loads on the braking system will be eased off, which leads to brake fade if not handled properly. Second, you’ll not able to increase the speed with lighting fast reflexes.

There are 6 things to avoid when operating a DCT (Dual Clutch Transmission) or a DSG (Direct Shift Gearbox). Petrolheads will absolutely adore driving this automatic transmission car though it comes with some shortcomings such as more clutch wear and high maintenance.