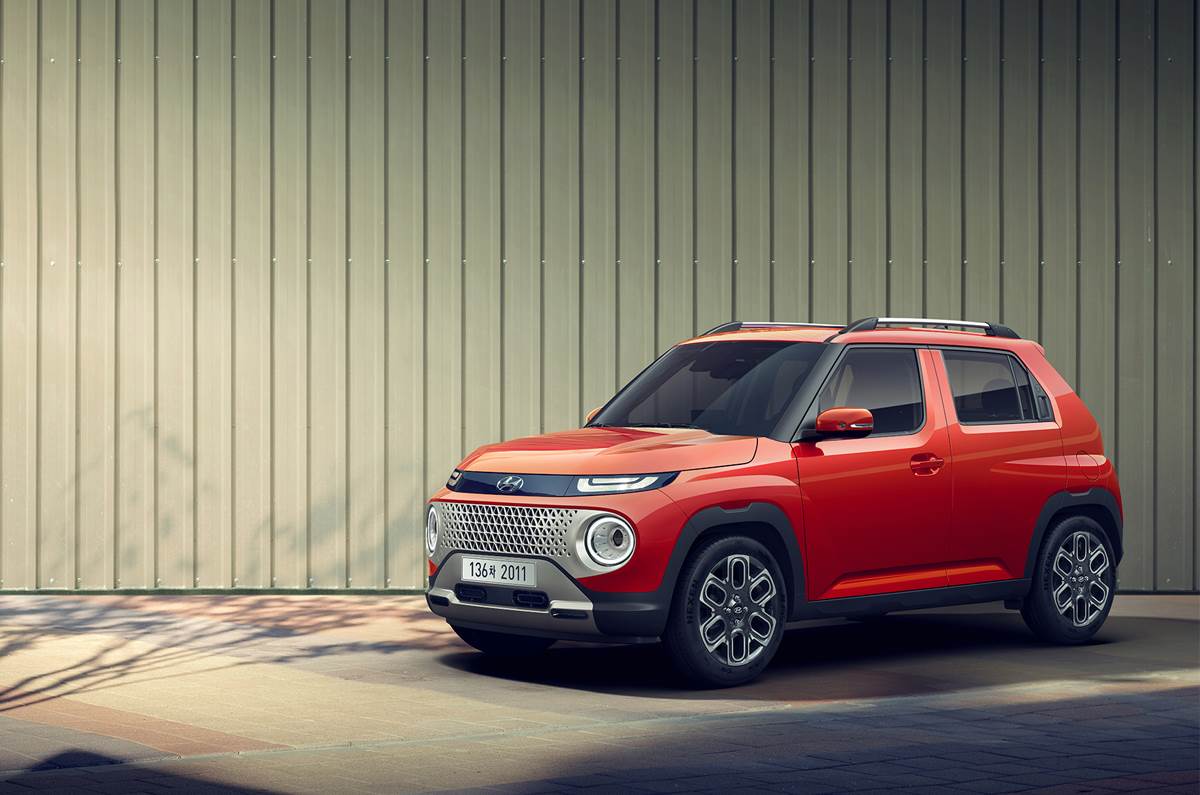 The first images of the upcoming Hyundai Casper micro-SUV have been revealed ahead of the vehicle’s debut, which will take place in South Korea later this month. The Hyundai Casper will be Hyundai’s smallest SUV in its global line-up. By early 2022, the Casper is likely to arrive in India after being introduced to Korea. According to our sources, the Casper SUV could carry a different name in India.

The design of the Hyundai Casper is best described as quirky. Casper has a very unique design with an upright silhouette and a slightly boxy appearance. In a gloss black panel, Hyundai’s logo and LED daytime running lamps are positioned on top of the split LED headlamps, like those on the vast majority of new Hyundai SUVs. Furthermore, a circular headlight with LED rings is mounted in the bumper.

There’s something really unique about the face, and it’s the triangular motifs on the silver grille. A gloss black grille is the other version of the grille, which also has circular design motifs that mimic the headlamps. Additionally, a faux silver skid plate is included, as is a flat bonnet. All around, there is generous body cladding in SUV fashion.

Casper’s wheel arches feature prominent flares and squared edges from the side profile. With the front and rear windows having different shapes, the window line is particularly unique. Black has been applied to the A-pillar, while the B-pillar is finished in body colour. Moreover, the rear door handles were neatly incorporated into the C-pillar. Aside from roof rails and alloy wheels with twin colours, the Casper is also equipped with roof rails.

There is a dual-tone look for the tailgate, with the upper half sporting a gloss black finish as well as a triangular LED light motif. A circular tail lamp is positioned below the bumper, matching the positioning of the headlamps. In addition to the fake silver skid plate, the rear bumper is also painted silver.

Casper interior images have not yet been revealed by Hyundai. The interior of the Casper, however, appears to be upholstered in white from previous spy shots. There will be a freestanding touchscreen system for the dashboard. It will have a wealth of features, including connected car tech, as is typical of Hyundai cars.

Nevertheless, we have yet to learn which engines Hyundai will offer in India for the Casper. For a more affordable model, Hyundai might opt for the 1.2-litre four-cylinder motor or even the 1.1-litre motor from the Santro instead of the 1.0-litre turbo-petrol unit.

South Korea will be the first country to sell Casper this year. Those findings are expected to make it to India by early next year. Its counterparts in India will be the upcoming Tata Punch and the high-riding Maruti Suzuki Ignis, as well as entry-level compact SUVs like the Nissan Magnite and Renault Kiger.