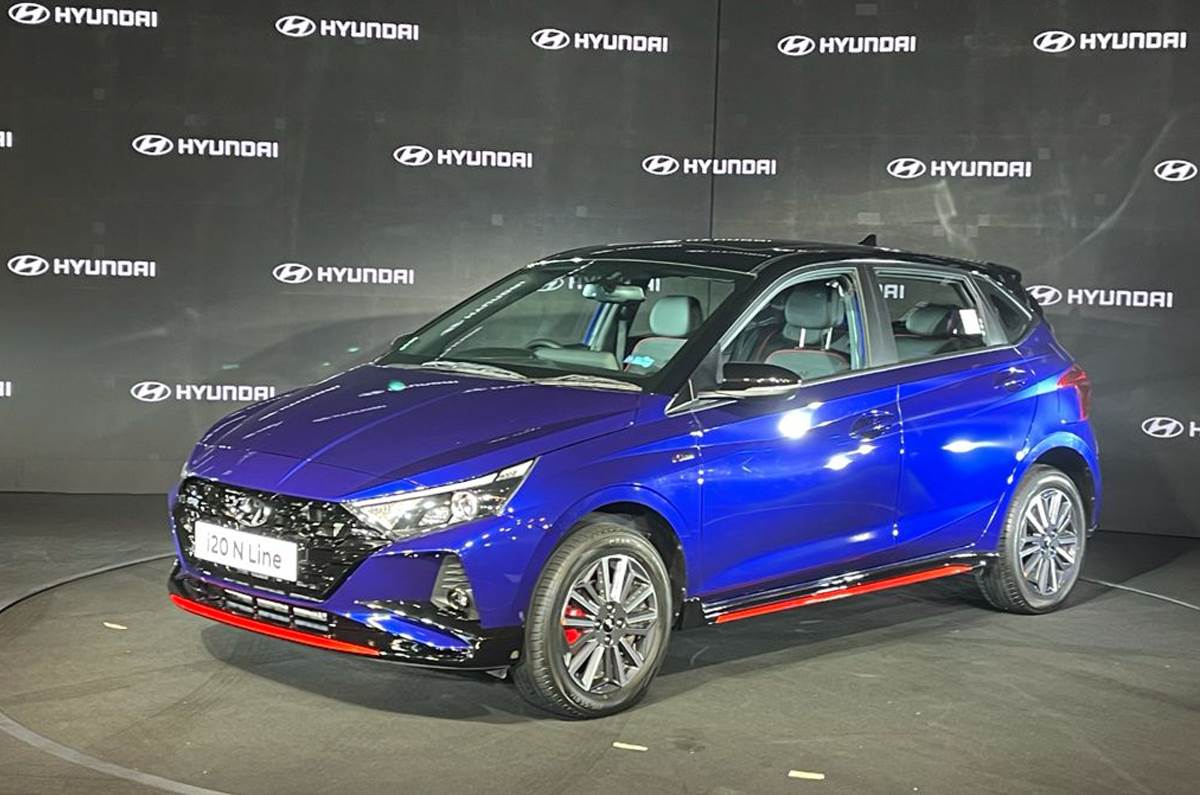 In addition to showcasing the i20 N Line in India, Hyundai has opened its bookings. Hyundai dealerships or online, customers can reserve the car by paying 25,000 at the time of booking. 2nd September might be the time for price announcements.

A prominent distinguishing feature of the N Line is the sportier exterior of the cars. There are a number of sportier looks the Hyundai i20 N Line gets, including a sporty-looking grille with a ‘chequered flag’ inspired design and N Line logo, as well as a front splitter.

A new design for the 16-inch alloy wheels marks the i20 N Line apart from its family members. Additionally, a red insert is added to the side sills. Red even covers the brake callipers at the front. There are several sporty updates at the rear, such as the thicker bumper with the twin exhaust pipes, the exhaust pipe tailgate spoiler with wings and the finished tail lamps with dark chrome.

There isn’t much difference in the layout of the dashboard between this and a regular car. The interior is all black, but red highlights and ambient lighting add flavour to it. Furthermore, it gets new N-branded leather gear knobs and leatherette seats with the chequered flag design, as well as new metal pedals and a three-spoke steering wheel.

The N Line i20 is equipped with all the same features as the standard i20. The vehicle includes a 10.25-inch touchscreen infotainment system with Apple CarPlay and Android Auto; a digital instrument panel; wireless phone charging; a sunroof with a single-pane; and an eight-speaker Bose audio system.

According to previous reports, the India-spec i20 N Line is powered by a 1.0-litre, three-cylinder, turbo-petrol unit that delivers 120hp and 172Nm. There are two transmission options: the 6-speed iMT gearbox and the 7-speed DCT transmission. A paddle shifter is now part of the DCT gearbox, enhancing driver engagement. Although the turbo-petrol engine on the Hyundai i20 comes with a manual transmission, Hyundai missed this chance to introduce a manual transmission.

The powertrain configuration and tuning remain identical to the i20, but the exhaust note has been modified for better sporty performance. Additionally, the suspension has been tuned to provide better handling and a more planted feel during cornering. Aside from that, the i20 N Line also comes with disc brakes on all four wheels instead of just the front. On the Hyundai I20 N Line, Hyundai claims to have improved on-centre steering feel.

i20 N Line is the top-spec model in the i20 range, and its launch is expected to take place in September. According to current prices, the Asta(O) turbo-DCT variant of the range retails for Rs 11.40 lakh (ex-showroom, Delhi). There will be an additional cost of Rs 1-1.5 lakh for the N Line. It is believed there are no direct competitors in India for the Hyundai i20 N Line because of its price.