A Road-Legal Lamborghini Huracan STO Debuts at a Price of Rs 4.99 Crore

Lamborghini Huracan STO was officially launched in the Indian car market on Thursday at a price of INR 4.99 crores (ex-showroom). This road-homologated super sports car is a tribute to Lamborghini Squadra Corse’s one-make Super Trofeo EVO races in which the Huracan Super Trofeo remains a milestone of ultimate in-car performance.

The Huracan STO is a fast vehicle, with an impressively powerful 640hp V10 and 565Nm of torque, powered by a naturally-aspirated V10. The sports car can reach 100 kmph in 3 seconds, and 200 kmph in 9 seconds, with a top speed of 310 kmph. According to Lamborghini, the light weight of the materials and aerodynamic efficiency of the STO make it lightning fast. 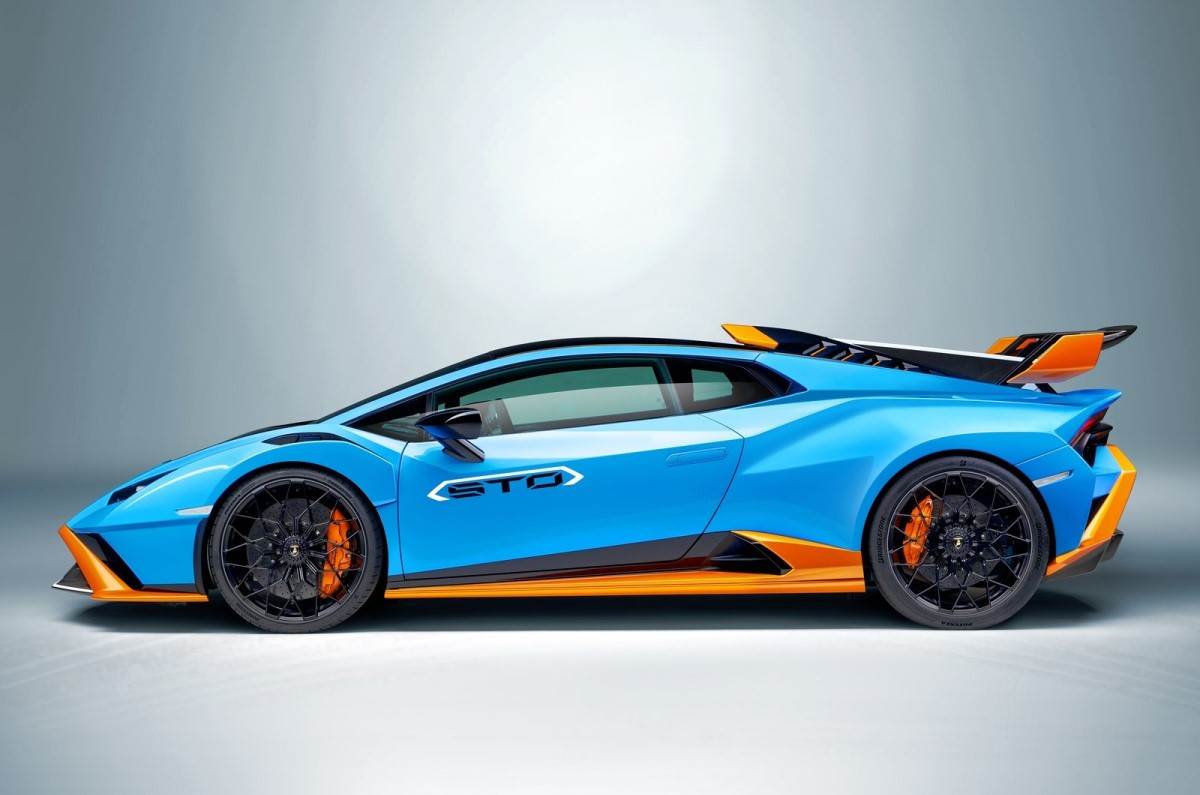 A Lamborghini engineer invented the ‘cofango’, which consists of the front bonnet, fenders and bumper in one piece. According to the front bonnet’s new air ducts, more airflow through the central radiator aids in cooling the engine more quickly. Airflow is directed to the new underbody and to the rear diffuser through a new front splitter. The cofango’s side profile directs airflow around the front wheels, reducing drag. The rear fender is derived from Super Trofeo EVO design and decreases drag as it increases downforce and overall efficiency of the car.

The rear hood design features an integrated air scoop to improve air-cooling at the rear under hood. The shark fin on the rear bonnet is another feature that enhances the STO’s dynamic abilities. The front part of the airfoil of a single slotted wing with a double air foil can be rotated into three positions to provide greater rear downforce.

The Lightweight Design of the Lamborghini Huracan STO

It was discovered that carbon fibre was extensively used on the body of the Huracan STO. Lamborghini claims 75% of the exterior panels are made from carbon fiber. The carmaker also highlights that its R&D department has adopted a carbon fiber ‘sandwich’ technique for its rear fender which is commonly used in aerospace.

The V10 aspirated engine has been calibrated for a sporty, responsive racing feel, with a direct pedal-to-throttle feeling and improved engine sound sharpness at high revs.

Drive modes available include Trofeo, STO, and Pioggia. As the default, the first one is meant for normal driving conditions. The Trofeo mode sets all systems to maximize speed on dry asphalt and the fastest lap times on the track. Pioggia (rain) mode activates the traction control system, torque vectoring, rear-wheel steering, and ABS system on wet highways.

CCM-R’s brakes are designed with materials expertise acquired from F1 applications. Lamborghini claims its CCBs have a 60% higher stress resistance than conventional CCBs, a 25% increase in maximum brake power, and a 7% improvement in longitudinal acceleration.

A newly designed front trunk for helmet storage, as well as a roll bar with four-point seatbelts, were also incorporated.

Among the functions managed by the main touchscreen unit is the drive mode indicator, the LDVI system, tire pressures and brake temperatures.

Furthermore, owners have the option of fully customizing both the exterior as well as the interior of their purchases.

Should You Buy One?

Lamborghini says that a new Performante model is unlikely since the Huracan Evo provides the same level of performance at an affordable price. Therefore, the STO option at Rs 4.99 crore appeals to the increasing number of supercar buyers who attend races on the weekends and are always striving to best their previous lap times.

This is a much more serious driving tool than the Performante was, and buyers looking to simply own a high-spec Huracan might be better off getting an Evo and adding some performance options to it. This variant of the Huracan – the most extreme yet – demands more than just an extra outlay; it demands a greater degree of commitment in the art of driving.