The Land Rover Defender 90 and Jeep Wrangler are the direct descendants of the vehicles that invented the genre. In 1941, the Willys MB Jeep helped win World War II by being a feisty little go-anywhere military vehicle. The 1948 Series 1 Land Rover, the prototype of which was built on a modified Jeep chassis, turned off-road capability into a useful tool for farmers, explorers, and civilian agencies around the world. From that moment on, they have been related in both form and function.

Off-road capability is delivered differently between the 2019 Wrangler and the 2021 Defender 90. Wrangler employs tried-and-true off-road engineering principles and hardware, relying on its body-on-frame, live-axle construction. This unibody, independent-suspension Defender uses computer technology to manipulate the nuts and bolts differently from a Jeep, and its engineering philosophy is diametrically opposed to that of the Jeep. The Jeep is an analogue tech. The Land Rover is a digital tech.

Today’s Jeep is built the way Jeeps have always been built, with a body bolted to a frame and with live axles front and rear. Although the basic formula remains the same, much has changed over the past seven decades. There’s extensive bushing between body and frame to reduce noise, vibration, and harshness, and the axles are now suspended on coil rather than leaf springs.

The Land Rovers are bigger all around. Including the rear-door-mounted spare tire, the Defender 90 is 180.4 inches long overall, while the short-wheelbase Wrangler measures 166.8 inches.

Smaller size might give the Jeeps a slight edge in certain extreme rock-crawling scenarios. But with a wheelbase 5.1 inches longer, the Defender 90 has way more room inside than the regular Wrangler, and it’s able to accommodate six passengers when fitted with the optional centre front seat. The Defender 110, whose wheelbase is just 0.6 inch longer than the Wrangler Unlimited, can be ordered with a third row.

While entry-level Wranglers can be ordered with a manual transmission and part-time four-wheel drive, the Defender is only available with an eight-speed automatic and permanent four-wheel drive. However, the six-speed manual transmission is available only with the V-6. Order the optional eTorque powertrain, and an eight-speed automatic is the only option.

Both Defender and Wrangler Rubicon have two-speed transfer cases, but only the Jeep allows front, centre, and rear differentials to be locked. A locking centre diff and active locking rear differential are available as options, along with a new configurable version of Terrain Response 2 that allows drivers to tailor the powertrain and suspension settings.

The six-cylinder Defenders are in another league altogether. If Land Rover’s claimed 0-60 time of 5.7 seconds for the Defender 90 P400 holds up, it will be 1.7 seconds quicker than the V-6-powered, soft-top, short-wheelbase Wrangler Rubicon, despite a 485-pound weight disadvantage.

Not surprisingly, the Jeep Wrangler Rubicon is the champion of these off-road SUVs. Straight from the dealership, this rugged SUV can navigate the terrain with greater ease than the Defender 90 and still have some tricks up its sleeve (such as a front stabilizer bar that can be disconnected by a button push for greater wheel articulation).

Even though the Land Rover Defender 90 is the most comfortable and refined, it doesn’t skimp on its off-road abilities. The smart electronic systems do much of the work for the driver as the vehicle effortlessly scales ruts, bumps and steep inclines. For novice off-roaders, this can negate some of the thrills of off-roading because they feel more like passengers, but for people with some experience, it can mean the difference between getting to their destination or calling for help.

The Wrangler Rubicon comes with 17-inch wheels and 285/70 tyres that give a rolling diameter of 33 inches. There are 12 different wheels available for the Defender, ranging in size from 18 inches to 22 inches, but no matter which size wheel you choose, the tyre paired with it ensures a 32.1-inch rolling diameter. For serious off-roading, the 18-inch steel rims and 255/70 tyres are the best choices.

Jeep has launched the locally assembled Wrangler SUV in India at a price tag of Rs 53.90 lakh and Rs 57.90 lakh (ex-showroom) for the Unlimited and Rubicon variants respectively. Jeep Wrangler prices start at ₹ 62.52 lakh and go up to ₹ 67.11 lakh. The price of the Petrol version for Wrangler ranges between ₹ 62.52 lakh – ₹ 67.11 lakh. 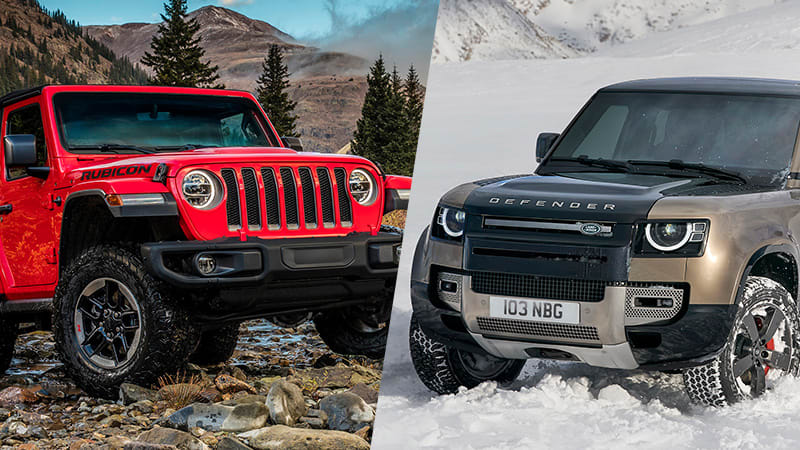 The Land Rover Defender is clearly the easiest to live with. Its high levels of comfort and a long list of convenience and tech features make it a standout in the bunch, yet it still has the ability to conquer the same terrain. Its higher price is its greatest drawback, followed by the nagging feeling that all of its electromechanical wizardries could be a liability in remote locales.

The Jeep Wrangler’s narrower focus on off-road prowess comes at the expense of on-road comfort and confidence. For the relatively rare shopper with hardcore-terrain supremacy as a priority, the Jeep is the top choice. There’s a distinct charm and character for sure, but it’s not the best choice for those who will use it primarily as a commuter.

Latest Most Popular Cars in India You May or May Not...

Most Expensive Cars in the World We Bet You Cannot Afford!...

Latest Most Popular Cars in India You May or May Not...